Morel mushrooms are foraged all over North America and various parts of Europe, Asia and Africa. they are highly prized and sought after during the fresh season and are equally sought after in their dried format.

It can be difficult to identify the exact species as some mushroom hunters estimate a total of 50 different varieties of Morels exist. However, most Morel varieties are identified by colouring and are typically broken down into two groups: Naturals and Burns

Natural Morels are just as their name implies, naturally occurring in the wild and without any preference or pattern of fruiting. This group includes the Blonde or Yellow Morels as well as the Black Morels. Naturals have a much thicker wall (often referred to as a double wall), which can be seen when examining a cross section of a vertical cut.

Burn Morels, or Conicas as they are commonly known as, are thin walled mushrooms that fruit in the scorched earth after a fire occurs. This time period is typically 1 year so mushroom hunters tend to document large fires in heavily forested areas in anticipation of a large crop of Conicas a year later!

Morels in North America are picked anywhere from May until July, however their availability heavily depends on favorable weather conditions.

They are unlike any other wild mushroom with a nut-like meaty flavour and are very aromatic and versatile. Try them stuffed or add them to your favourite dish but be sure to cook them thoroughly first as Morels should never been eaten raw. 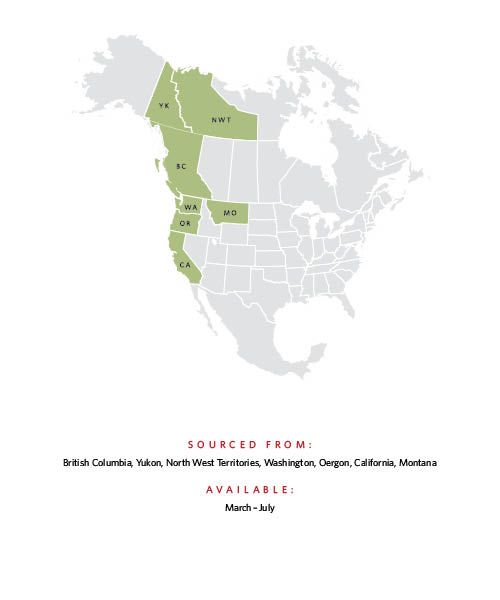